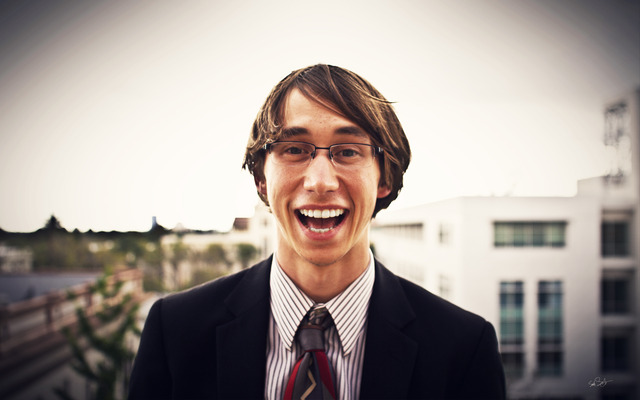 CSB: To what extent do you see location affecting your work?

AB: Location plays a huge role in the development of a composition. I grew up in Medford, a medium-sized town in Oregon, but after undergrad and masters in Orange, Orange County and Los Angeles respectively, I’ve been in southern California for about 8 or 9 years now.

Living in a huge city with so much music available has absolutely shaped the way that I listen to music and how I compose music. I think that every composer has to find where they fit in. For me, I’ve become interested with how my music fits in (or stands out) from the music surrounding it in the community.

CSB: What are your impressions of the arts scene in Los Angeles?  How have the various places you have lived over the years impacted your music?

AB: The arts scene in Los Angeles is outstanding. I could spend all day talking about the different organizations and groups, large and small.

The city has a long history with contemporary classical music. Presenters like Piano Spheres, Jacaranda, Green Umbrella, and Monday Evening Concerts have pushed the boundaries of music for decades and decades (with premieres by Stravinsky, Schoenberg, Boulez, and many more).

Yet it’s also home to countless new series: Tuesdays @ Monk Space presents a variety of cutting edge new music in a small brick warehouse that used to be a speakeasy. WasteLAnd challenges its listeners with avant-garde and experimental music. The Industry presents experimental opera, from “Invisible Cities” which was experienced live on headphones through Union Station to “Hopscotch”, which was performed in cars across the entire city.

I currently work as a recording engineer, so I experience plenty of concerts every month. That includes anything from solo piano recitals (in which works were written two centuries ago) to composition recitals (in which works were written two days ago). Nowadays, when I sit down to compose, I’m very concerned with what I can bring to a concert that you can’t get anywhere else. For example, in the work you’ll hear tonight, I designed a somewhat unique tuning for the guitar. I also ask the guitar to play with extremely specific techniques (precise hand positions to create exact timbres) that go beyond standard guitar performance.

CSB: Could you tell us a little more about the piece we’ll be presenting?  What compelled you to write it?

AB: I am fascinated by intonation, which is the primary factor behind “Unfold”.

Generally speaking, tuning for any instrument usually involves compromises: Standard guitar tuning (“equal temperament”) is not really ‘perfect’ for anything, but ‘pretty good’ for most everything. But I ask the guitarist to re-tuned microtonally (in this case, to the “harmonic series” of the note D), and I write music that exaggerates the differences between equal temperament and the microtonal tuning. Musical passages are written to juxtapose the extremes: either sounding very ‘pure’ or emphasizing the ‘crunch’ & dissonance.

Although I enjoy experimenting with timbre and intonation, I always incorporate some “traditional” elements of composition. You’ll hear motivic development as themes repeat and develop over time. The reason this piece is called “Unfold” is because I started composing it with a single theme (a phrase of harmonics) which you only hear once in its entirety, at the very end. The movement of the piece towards the final exposure of the theme is like the process of unfolding different variations to get to the finale.

CSB: What is your relationship with the guitar? Did that relationship affect the way the piece was conceived?

AB: As a performer of classical guitar, I have a pretty intimate understanding of standard techniques and fingerings. I composed most of this piece with my guitar in hand, but several sections I specifically got away from the instrument to write the notes in my mind, not the notes in my fingers.

Nowadays, I perform primarily guitar for outreach concerts (elementary schools, hospitals, libraries, etc.) with the Kaleidoscope Trio or as solo background music for private events. That means that my technique isn’t perfect; I constantly revised this piece while writing to make it fit my fingers. I have tons of respect & gratitude for concert guitarists like Christopher Wilke to make this music like this come to life. Thank you!

CSB: What lead you to explore microtonal elements in this piece?

AB: Quite simply, I love the way it sounds! I’ve heard microtonal music on guitars before, and I thought to myself: “I want to do that”.